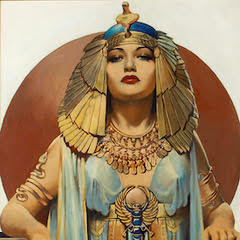 I’ve been dwelling in Ancient Egypt lately. No, I haven’t worked out time travel yet, but I’m reading a biography of Cleopatra by Stacy Schiff.

We don’t know that Cleopatra was as gorgeous as the movies depict, but she was undeniably impressive. As the pharaoh of Egypt, she had to maneuver among family, subjects, and the power of Rome, each one poised to kill her if she made a wrong move.

Her reign lasted from the ages of 18 to 39, during which time she formed romantic/political alliances with the two most famous Romans—Julius Caesar and Marc Antony (years apart, bearing children to both)—riding a tide shifting between adulation and infamy, and weathering numerous wars, until she took her own life with poison (some say from the bite of a cobra or asp) when defeat by Augustus Caesar turned inevitable.

What a gripping life. So eventful we’re reading books about her two thousand years later.

The world is having an eventful year right now, isn’t it? Wrenching violence in the Middle East, the Cubs winning the Series after 108 years, and a power struggle in the U.S. no less tumultuous than a season of Game of Thrones.

What about you? Was your year eventful?

We’ve got an interesting contest running through mid February. We invite you to write a 16-word memoir, telling a true story about something that happened in your life in 2016. Aside from the chance to win a free Gotham class, it’s a useful way to ruminate on the past year. We had our interns test it out. Here’s a great example from Josh Sippie:

One-way and nonrefundable, the ticket prickled in my pocket, reminding me what I was leaving.

In any given year, anyone is bound to have a few memorable happenings, whether it’s the death of a best friend or finally beating your nephew at chess. Even when pain is involved, it’s right to have a few big events every year— each one a story weaving into the larger narrative of a passionate life.

If, upon reflection, you find your 2016 wasn’t momentous enough, then consider shaking the tree in the coming year. Take a risk on a relationship. Walk away from a soul-crushing job. Fight for something you believe in. You can even drum up excitement just writing about something dramatic, whether it’s factual or fabricated.

We’ll even let you count a Gotham class as eventful—a place where you meet fascinating people, learn from talented teachers, and sail the wild seas of creativity.

This life is your history. Write it well.