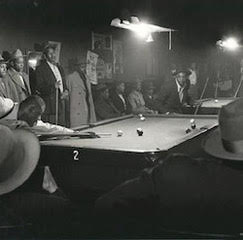 As writers, we talk a lot about our need to cultivate empathy, toward our subjects, our characters, our readers, our world. But what does that mean, exactly?

I could give you a long-winded definition, but instead, let’s just take a look at “We Real Cool” by Gwendolyn Brooks:

Seven at the Golden Shovel.

We real cool. We

Brooks — Pulitzer Prize winner, civil rights activist, and Illinois Poet Laureate — loved to say her inspiration came from just looking out her window at Chicago’s South Side. But she did more than look. She empathized.

To write with empathy, Brooks-style, you want to feel what someone else does, not merely surmise it. To do that, you’ll want to:

Brooks said she wrote “We Real Cool” after “passing by a pool hall in my community one afternoon during school time, and I saw a little bunch of boys…and they were shooting pool. Instead of asking myself, ‘Why aren’t they in school?’ I asked myself, ‘I wonder how they feel about themselves?’ ”

But she doesn’t ask whether they could let it in. She says, we.

We wonder. But not well! not for a minute!

Since Number Five is out of the bathroom now,

We think of lukewarm water, hope to get in it.

This year marks the 100th anniversary of Brooks’s birth, and to celebrate, the Poetry Foundation created a fabulous animated video of “We Real Cool”, which re-creates the moment that inspired the poem, as Brooks herself reads it.

The ending is the perfect tribute to Brooks. As the pool players leave the Golden Shovel, they walk right by her, but don’t notice her. Except for the last boy, the smallest. He stops, turns, and gazes at her. Brooks lifts her glasses, and meets his eyes, and they stand there together for a moment, each one seeing the other.