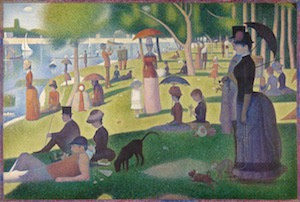 The musical Sunday in the Park with George moves me to an embarrassing degree, largely because it shows the struggles of an artist and says so much about how art is created— things important to me and probably you too. The music and lyrics by Stephen Sondheim dive into my soul.

The first act is about the painter George(s) Seurat, who is working on the greatpointillistic painting “A Sunday Afternoon on the Island of La Grande Jatte,” pictured above. (Though the show focuses on fine art, the ideas apply to a writer or musician or anyone who creates.)

In the song “Finishing the Hat,” George is torn between his lover/model/muse Dot, and his compulsion to devote all his energy and time to painting, which makes their love affair tempestuous. Here’s a bit:

George
Yes, she looks for me—good.
Let her look for me,
To tell me why she left me,
As I always knew she would.
I had thought she understood.
They have never understood,
And no reason that they should.
But if anybody could…

Here’s a rendition from the last Broadway production.

Have you had to shut people out to get the work done? Should you do it more? Even if it endangers a relationship? Is it worth it? How strong is the pull of your art?

The second act leaps ahead in time, focusing on George’s great grandson, also named George. He too is an artist, making art with innovative light machines. He grows frustrated, feeling he has nothing important to offer, confiding to a vision of Dot, his great grandmother. She counsels him in the song “Move On.” Here’s a bit:

George:
I want to move on.
I want to explore the light.
I want to know how to get through,
Through to something new,
Something of my own.

George and Dot:
Move on, move on.

Dot:
Stop worrying if your vision
Is new.
Let others make that decision.
They usually do.
You keep moving on.

Here’s a rendition from the original Broadway production. (I’m trying not to cry as I watch it.)

Do you worry if you have something new or interesting to say? Does your inner critic get the best of you? Does it paralyze your forward motion? Do you have the audacity to ignore those voices and just move on?

The show ends with George facing a white surface, thinking of his great grandfather, saying:

White.
A blank page or canvas.
His favorite.
So many possibilities.

Yes, that’s the wonder of being an artist.