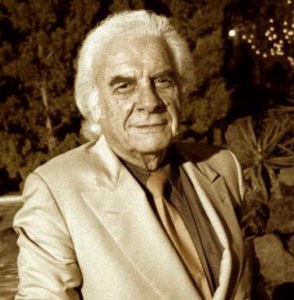 It’s a good thing for the mind to wander, especially for a writer.

The other day my mind was wandering and—I have no idea why, perhaps because it’s summer or I was pondering pasta with red sauce for dinner—I thought of a summer job in high school, as a busboy at Il Sorrento, an Italian restaurant in Dallas, Texas, now long gone. Every night I’d come home bone-tired, my pockets stuffed with one-dollar bills (my share of the tips doled out by the mostly Persian waiters).

The most vivid memory, though, was of a night early in my run when the owner spotted me handling the bowls of the spoons with my hands. I realize now how stupid that is, but teenage-me had no idea there was anything improper about sticking my fingers on the part of utensil soon to enter a diner’s mouth. Just didn’t occur to me.

The owner gestured for me to follow him to the kitchen, then he roared at me, ferocious as a lion, about my infraction. Even then teenage-me didn’t think it was that big of a deal.

His name was Mario Messina, a name I hadn’t thought of since who knows when? That’s him in the photo. He scared me, so I mostly steered clear of him (albeit handling silverware the proper way). At summer’s end on my last day, he chatted with me a bit, showing real interest, and so I left with a better feeling about him. But I never knew much about the guy.

After wandering into this memory, I thought to check him out on the internet. I found his obituary. He died six year ago at the age of 98. He played football at Notre Dame, which has always been a legendary place to play, even more so back then. He charged the beaches of Normandy on D-Day, eventually earning two Purple Hearts. He spent six months in a German prison camp where he almost starved to death, causing him to resolve if he made it home he would serve people good food.

His restaurant was the first to bring authentic Italian cucina to Dallas and became one of the best places in town to dine whether you were a regular Joe or a celebrity; he served my parents as well as Nat King Cole.

My aimless musing aren’t always so interesting. Sometimes it’s more like: should I cut my toenails or watch TV or both at once? But if you keep wandering—allowing your mind to really roam—you’re bound to come across something you didn’t realize was there, maybe even something worth writing about.

Thursday, folks! Time to get thoughtful with Gotham President Alex Steele. It's #GWThoughtfulThursday

If you're missing Inside Writing (we are too), you can sign up for Season 3!

The most-clicked links in this week's newsletter were: