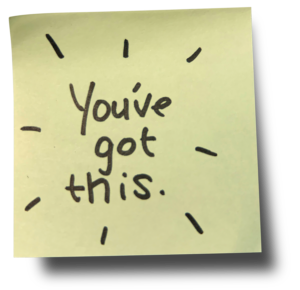 Shortly after Thanksgiving, a friend of mine confessed he’s abandoned a project he’d been working on intensely through the summer and fall. This tumultuous year has been especially wearying for some of us, my friend included.

Each year, once the December holidays begin, this is a common refrain: We have too many end-of-year deadlines to meet, parties to attend, or gifts to buy, on top of the usual demands of modern life. “I’ll start up again next year,” we say.

And look—2020’s been exhausting. It might take everything you have to answer your email and occasionally remember to shower.

If you’ve got a little gas in your tank, though, maybe this holiday season, you don’t let your creative work wait.

For one thing, the pandemic is canceling a lot of holiday travel, crowded parties, and complicated family dinners.

Also, if 2020 taught us nothing else, it reminded us that anything can and does happen—Mystery monoliths! Discovering buried treasure in the Rockies! Calling 911 because you ran out of toilet paper!

Why not take your shot while you can?

Consider my cousin Laura Caldwell. One summer, shortly after she graduated law school, she took a vacation to Italy with three close friends. Afterward, she wanted to read a novel about girlfriends traveling together, but she couldn’t find any. So, she started writing one of her own.

Five years after that, she was at a writers’ conference where the speaker was thriller novelist Brad Meltzer, and during the Q&A Laura raised her hand.

“I’ve been querying and submitting my novel for five years, and I’m getting no takers,” she said. “At what point do you just, you know, take the hint?”

Meltzer walked over to where Laura was sitting and leaned in, nearly nose-to-nose.

She didn’t. She kept querying, and revising, and writing new books, until a couple of years later, at another writer’s conference, she struck up a conversation with a woman who just started her new job as an editor at a new imprint, one specializing in women’s fiction. “Like a novel about three close friends on vacation in Italy?” Laura asked.

A year after that, Red Dress Ink released Laura’s Burning the Map, the first of her 14 novels.

Through those long years of revising, submitting, getting rejected, and beginning again, one of the things motivating Laura to keep going was the memory of Brad Meltzer, basically ordering her to.

But something else propelled her forward, as well: Her belief that if she kept trying, anything could happen.