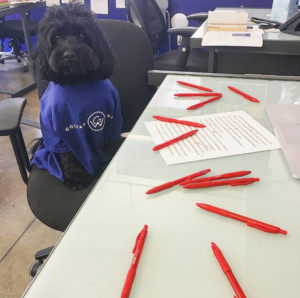 “Fix that. And then never, ever do it again!”

One of my all-time favorite teachers said that to me in a workshop once—in a voice more good-natured ribbing than barking command—after I wrote “my sisters and I” when I should have written “my sisters and me.” It was a small flub, one my classmates didn’t even notice.

But my teacher knew, every word in a story matters. And he wanted to make sure I knew it, too.

And you know what? It worked. I still check every story I write, careful not to commit that gaffe again.

And now, dear writers, it is my turn to say it to you, about a different, still small, but no less critical lapse:

Stop using “that” when you are referring to people!

Here’s what I mean:

“Plus, with how animated he gets on the sideline, he just looks like a coach that can establish a successful culture.”

“Working for a boss that supports you is vital to professional and company success.”

“Victor Rios on a Teacher That Tapped into His Soul.”

The word those writers should have used is who.

“Who” instantly confers humanity on whatever it modifies. “That” is the pronoun for inanimate objects or animals—a dress that fits; a horse that kicks.

They might seem interchangeable, but when you use “that” for a person instead of “who,” you drain just a bit of that humanity out of your subject. Look at the examples above. Wouldn’t “a coach who” be much more vivid?

And when I first read “that” with “tapped,” for a split second I pictured a valve-and-spigot contraption, the kind you hammer into a tree to siphon out the sap.

It’s a small difference, but a powerful one. “Who” is clearer. It’s also more warm-blooded.

Consider these lines from a poem by Wendy Videlock:

Videlock leans into the humanity “who” brings to her sentences, repeating it to intensify that sensation. Then, in the last stanza, she capitalizes on the messy, anarchic, people-filled feeling she’s created, to more vividly and effectively personify the moon.

Your assignment this month, writers, is to go through your work in progress, and find the places where you’ve written “a mother that,” “a lawyer that,” “a civil rights activist that…,” etc… Fix them! Replace them with “who.”

And never, ever do it again!

Join @FrictionSeries EIC @DMHedlund and author @Seth_Fried this Wednesday, March 31 at 1 PM EST as they discuss writing contests and more with host
@sippenator101 on #InsideWriting Season 3!

Not only could your #CNF piece win you PRIZE MONEY, but it could be awarded by our CNF judge Hannah Grieco (@writesloud)! Marvelously talented, an expert eye, and can emit neon light from her fingernails!