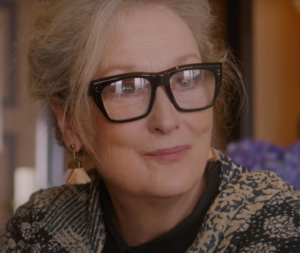 We writers can be quite annoying.

In the new movie Let Them All Talk, Meryl Streep plays a much-lauded author of “literary” fiction who is crossing the Atlantic on the Queen Mary to accept the Footling Prize, which, she points out, they don’t give in fiction every year. She is a sanctimonious sourpuss.

She invites two friends from college along for the voyage, but informs them the only time they’ll have together is dinner. At one such meal, she pontificates on her care with words:

It takes time to worry those into existence. The right one, the right one, there’s only one that’s right. I lament… Sometimes I wait for a word to come to me. I’ll wait a week.

She doesn’t care that they don’t care.

Over on another streaming service, you can find real-life writer Fran Lebowitz on Pretend It’s a City waxing wiseass to her friend Martin Scorsese. Lebowitz hasn’t written much in decades, admitting it’s laziness, so she just collects money from speaking engagements, figuring talking is easier than writing.

According to one of Fran’s long-ago books, you know your child will be a writer if:

The baby’s first words, uttered at the age of four days, are “Next week.”

I can be annoying myself. My wife has gotten frustrated (nay, angry) many times because she’ll ask me something or greet me when I’m in my so-called “deep focus” state, and I won’t respond until I’ve typed out my thought. I’ve asked her to make a silent signal that she wants my attention and then I’ll get to her as quickly as I can.

The suggestion was never taken.

Let Them All Talk was written by the brilliant short story writer Deborah Eisenberg. When I lived in Chelsea, I used to see her on Saturday mornings in the neighborhood coffee shop, having breakfast with her partner, playwright/actor Wallace (Inconceivable!) Shawn. They didn’t seem annoying, but rather so scintillating that I very much wanted to adopt them as regular dinner party companions, but, alas, I never worked up the nerve to say hello.

We recently invited Eisenberg to appear on our Zoom talk show Inside Writing and she responded thus:

I’m really zoomed out right now—and I’m always having trouble with my internet connection.  Also, I’m in a vile mood, fit company for nobody, just snarling and growling, which I don’t think would be very inspiring to your listeners.

Oh, she sounds so delightfully annoying. I want to befriend her even more now!

What’s your most annoying trait as a writer? Come on, you can’t be a true writer without at least one.

Join @FrictionSeries EIC @DMHedlund and author @Seth_Fried this Wednesday, March 31 at 1 PM EST as they discuss writing contests and more with host
@sippenator101 on #InsideWriting Season 3!

Not only could your #CNF piece win you PRIZE MONEY, but it could be awarded by our CNF judge Hannah Grieco (@writesloud)! Marvelously talented, an expert eye, and can emit neon light from her fingernails!