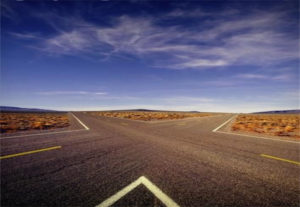 Lately, I’ve been thinking about crossroads.

It started when I revisited Saeed Jones’ beautiful and searing essay “A Poet’s Boyhood at the Burning Crossroads,” about living, and writing, at the intersection of being both a Black man and a gay man in America.

That led me to other stories about crossroads, including the end of the movie Castaway, an essay by Jenny Spinner about families passing one another in a hospital emergency room, and May Yang’s poem “Meeting Place,” about the junction of memory and the now.

All of that steered me into one of those moments where you realize something you knew but never bothered to articulate for yourself: That to be a true crossroads, two or more byways must not only meet, but keep going.

That’s what makes them loom so large in our imaginations, I think. Their arteries not only extend in at least four directions, but when you encounter one, you must choose: Change your trajectory, or stay your course.

When we encounter crossroads in stories, they often represent agency. The traveler considers, then decides, their direction. [Spoiler Ahead!] That’s what it means for Tom Hanks at the end of Castaway, as he considers four highways, each stretching to faraway horizons. When a passerby asks where he’s headed, he answers, “I was just about to figure that out.”

But they can represent other things, too. For Jones in his essay (seriously, you should read it), they represent living “at the edge of towns that cannot bear your company…where so many of us continue to live and witness and struggle onward.”

And we should remember, they don’t always scatter people, or stretch them. Yang describes them as the place where she holds both memory and people close. “When they cut these paths,” she writes, “we can speak.”

To my student Rosemary, they mean something else entirely. She wrote a lovely story about her mother growing up in rural Ireland just after World War II. On Friday nights, teenagers from far-flung isolated farms and remote villages would choose a crossroads and meet there. They’d break out musical instruments, lay sheets of plywood across the heart of the intersection, play music, and dance.

Ever since I started thinking about them, I see crossroads everywhere, of course. And now, I hope you will, too. Where are they in your stories? What do they mean to you? And how can you make them work for you, to carry you closer to your reader?