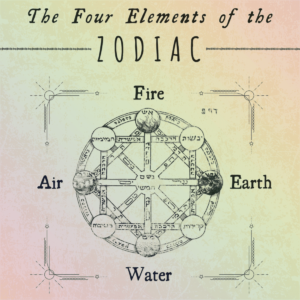 Who are you as a writer? What’s your voice, vision, style, milieu, brand? All of this may come more or less naturally, but it’s a fun thing to think about.

I’m not really qualified as a literary critic, let alone an astrologer or alchemist, but allow me to present an interesting way of looking at types of stories, via the four elements and four brilliant nineteenth-century women authors.

Air – Jane Austen
She wrote deluxe romance novels—exquisitely wrought characters engaged in an elaborate mating dance. The leading women (Elizabeth, Elinor, etc.) are of sharp wit; their eventual mates may seem imperfect at first, but they always turn out dashing and good. Really, everyone is mostly decent, aside from the assorted cad or social climber. These well-attired folks float in a region of the ideal, where people seldom die, no one lives in a shack, and true love (at least among the leads) always wins out.
Also, Classic TV show – Sex and the City

Fire – Charlotte and Emily Brontë
Charlotte wrote Jane Eyre and her sister Emily wrote Wuthering Heights. They conjured characters on fire—driven by love, lust, and madness. Heathcliff, in despair over the death of his soulmate, dashes his head against a tree; consumed by revenge, he seeks to destroy all around him. Jane’s employer, Mr. Rochester, lustfully falls for a woman he is forced to marry, who turns so dangerously mad he locks her away on the top floor of Thornfield Hall, until she sets fire to the house.
Classic TV show – Game of Thrones

Earth – Mary Shelley
Her novel Frankenstein may not seem to be earthy; it’s one of the first works of science fiction and its subtitle, the Modern Prometheus, refers to fire. However, deep down it’s about the muddy, messy reality of getting through the day. The monster, made from abandoned body parts, fends for himself by seeking the most basic needs—food, warmth, shelter, companionship. His creator, Victor Frankenstein, seeks power over death by giving life to another, a way of mourning his mother who lies dead in the ground.
Classic TV show – The Sopranos

Water – George Eliot (pen name for Mary Ann Evans)
Perhaps the most elusive and ever-changing of the elements, which is appropriate for Eliot’s novels, especially her masterpiece Middlemarch.  We follow various characters in a village as they navigate the byways of life, often making bad choices and working through the consequences. Dorothea marries the scholar because she likes his intellect, not realizing his frustrations greatly outweigh his talents. Everyone is a mixture of flaws, follies, and best intentions. Happiness is too ephemeral to hold in your hand very long.
Classic TV show – The Wire