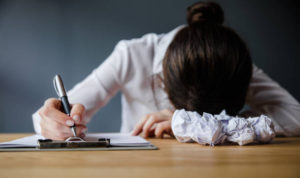 In my workshops and with friends, we talk a lot about rejection — how it’s so un-fun we’ll procrastinate sending our work out to avoid it.

Yet, as scary as rejection is, writers harbor another, deeper, more paralyzing, fear.

What if your work is not rejected? What if it’s filmed, published, shared…and everyone hates it?

Writer and theater director Amy Eaton tells a story about directing a play in Chicago, working for months to stage something quirky and fun, then having the ensemble announce they were reworking the whole thing, with or without her.

“I called my mom, and she said, ‘Clearly, you’re not very good at that,’” Eaton said. “And that stuck with me for years.”

What if your mom hates it? What if Neil deGrasse Tyson mocks you on Twitter? What if it’s secretly terrible and becomes the top search result for your name forever and no one will date or hire you ever again?

These are the questions that haunt us.

“They are also the wrong questions to ask,” Eaton says. “We need to be asking, who needs to hear your story?” she said. “You never know who your story’s going to help.”

I’m not saying just push past your fear of falling flat on your face. Not only would that be fruitless, it denies reality.

“We do ourselves a serious disservice by not talking more openly about what failing at writing feels like,” librettist and fiction writer Sarah LaBrie wrote. “I mean the physical feeling of writing badly: the instinct that tells you when a prepositional phrase is wrenching your sentence in the wrong direction; the sense that [your] entire career has beached itself upon a handful of paragraphs [you] just can’t order correctly.”

All we can do is keep going. Keep writing. Revise. And ask for help.

“I fail,” author Mike Magennis wrote. “I fail, I fail, I fail again, I very nearly succeed, I show it to my best reader, we tweak it together. I try to find…an editor who can make the story better. I trust that editor as much as I can. Not because they know best, but because they are not me.”

We’ve all been in the audience when a writer tried something and failed, spectacularly. It happens.

But it’s way more likely that your readers will give you sound feedback, your revisions will fix the problems and find the music, your editors won’t publish something actually bad.

When the Ghosts of Failures Future rise up to thwart you, put your faith in your community, and yourself. And picture the person who is waiting for your story. Because you never know who your story will help.