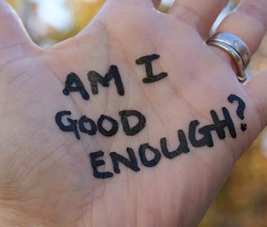 Awhile back, I told my class a story, about getting myself in over my head. I won’t go into the details, because it’s kind of long. Suffice to say it involved a fast-paced job I wasn’t well-trained for, and a slightly off dude who wanted me to ask him about his “Post-Traumatic Sex Disorder.” (No, that’s not a real disorder.)

I shared that story with my students because I figured they could relate. I told them I suspected they all at some point believed that they were the worst writer in the room. And in that moment, everyone nodded their heads. Yes.

Writers are especially susceptible to Impostor Syndrome, which, while it’s not an official disorder, is a real problem. It’s the sensation you’re terrible at something, even in the face of evidence that you’re not. It’s that nagging feeling that you’re a fraud.

Why are writers so prone to it? There’s probably an aircraft carrier full of reasons, but this one, from an article in The Atlantic, really resonates:

You never see the mistakes, or the struggle, [so] you get the idea that being a good writer is defined by not writing bad stuff.  Unfortunately, in your own work, you are confronted with every clunky paragraph, every labored metaphor and unending story that refuses to come to a point.

That’s a problem. Impostor Syndrome is a fear-churning monster, even more insidious than the proverbial one that hid under your childhood bed, because this one doesn’t disappear in the daylight. It’s awake 24/7, looking for new ways to sabotage your writing practice.

Afraid of being exposed as frauds, we become defensive, allergic to criticism. We resist feedback. Without feedback, we struggle to improve our work through revision. And we pull back, never pitching, never submitting for publication.

In worst cases, Impostor Syndrome lures writers to sabotage themselves, by abandoning projects, even destroying them. In his book On Writing, Stephen King describes how his impostor monster convinced him to throw an early draft of his novel Carrie into a wastebasket. (Luckily, his wife fished it out.)

Don’t let your own Impostor Syndrome take you that far. The next time it bubbles up, fight back.

And if none of those tactics quiets your own impostor monster, try setting a timer for ten minutes and writing on this prompt:

Write about a time when you found yourself in over your head.