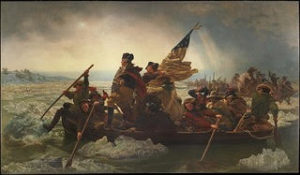 It’s an unpopular sentiment, but I kind of love it when Daylight Saving Time ends.

Partly it’s because twilight right now is a velvety indigo you don’t see in any other season. Partly it’s because it reminds me of growing up in the Midwest, and walking home on crisp evenings, through frost-coated leaves, the warm scent of newly re-opened fireplaces in the air.

Partly, though, it’s because falling back can be good for you.

We are loath to do it, especially here in the United States. We will walk around the block rather than retrace 20 steps. We curse a blue streak if we miss an exit. We equate falling back with retreat, with failure.

But falling back can be smart, tactically. Consider George Washington. Defeated in New York, his troops fell back across New Jersey, across the Delaware River. They crossed the Delaware three times in December 1776. The iconic painting by Emanuel Leutze depicts their second trip, as Washington and his troops headed toward victory at the Battle of Trenton—a victory possible only because Washington fell back, rested his troops and replenished their ranks.

To fall back in the world of programming means to make sure your instructions are carried forward, even during malfunctions. A fallback, (noun), is a contingency plan. When all hell breaks loose, it’s what you rely on.

That’s true for writing, too. I say this as someone who can be like those drivers who won’t make a u-turn. I favor forward momentum, and urge my students to favor it too. “Don’t look back—just keep writing,” I often say.

But recently I was reminded of the value of falling back. I visited a Gotham Memoir class, and the instructor assigned us an exercise: Write a scene from your childhood, an intense moment between you and your parents, or another authority figure.

I’m working on a writing project now, and I could have used the exercise to maintain my forward momentum.

Maybe it was that November twilight outside, but something moved me to fall back, to revisit a scene I’d already written.

It was a revelation. I recalled dialogue I thought lost forever. I excavated a shift in the action. And my perspective is better. All that work between the first run and the fallback informed the story. I know what’s important about that scene, now.

I wouldn’t have figured it out if I hadn’t fallen back.