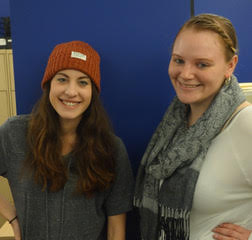 This month I salute our two current interns, Nikki and Kimberly. We can’t get rid of them…not that we want to. Nikki started as an intern last summer and Kimberly started last fall. Normally our interns stay for three months, but these two just keep on staying.

(That’s them in the pic—Kimberly on the left, Nikki on the right.)

But don’t go thinking they’re aimless girls with nowhere to go. On the contrary, I see them both going quite far with their writing lives.

Nikki, a fiction writer, was just accepted into the MFA program at Kingston College. She’ll either go there or Oxford, from which she’s waiting to hear. Either way, she’ll end up in England, which is perfect because she’s an obsessive Harry Potter fan, to the point of actually playing in Quidditch matches.

She plans to write YA novels, hoping to tell stories as important to other teens as some of these books were to her. As Nikki says, “Those are very screwed-up years. You’re at an in-between place. No one takes you seriously, but they tell you to be more serious. If you can pick up a book and see a character like yourself, it can help your life make sense.”

Kimberly writes plays, screenplays, and TV scripts. I recently saw her one-act play “Jumper” (which she also acted in), and, as I told her afterwards, it was “shockingly good.” She leans toward dark comedy, and it’s been awhile since I laughed that much at a show about suicide.

I was curious how she learned to write such great dialogue, and discovered that she constantly records overheard dialogue on the subway, disguising her interest with her headphones. Then she listens to the recordings, studying character and nuance and naturalness. I’m not sure it’s legal, but it’s an effective technique. She also watches favorite shows over and over, studying them, relentlessly, with a writer’s eye.

These two interns say they learn from us (Gotham staff and teachers), but I also find it inspiring to be around them—watching them at the outset of their careers, waiting and hoping for them to catch their sky-high artistic ambitions. It’s what I like best about our intern program.

Remember their names—Nikki Gross and Kimberly Alu. I believe you’ll be hearing more about them.

Godspeed, girls. But not too soon.

P.S. If you or someone you know is interested, you can learn about our intern program here. Careful, though, it’s not easy to leave.