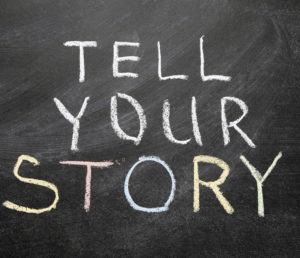 Recently I opened an essay by a student, started reading, and my heart sank. Not because the writer’s story was poorly written (it was gorgeous), or because the subject was difficult. No. It was because the student opened with a three-page apology for daring to write their story at all.It broke my heart. And also, at first, I felt complicit. This term, I assigned the memoir Heart Berries by Terese Marie Mailhot. Mailhot writes (beautifully and movingly) about being hospitalized for a nervous breakdown, growing up hungry and destitute on a Native American reservation, and living with the generational trauma of genocide. I also assigned essays about the nation’s opioid crisis, about dying and disappearing parents, about cancer. I talked about Nick Flynn’s memoir about his homeless father, Maya Angelou’s books about living under Jim Crow, and Dani Shapiro’s memoir that begins with a near-fatal car accident.

If my students got the idea that you need headline-making misery to publish a story, my reading list might have suggested it to them.

Maybe you got that memo, too.

Over at the Brevity blog, the writer Detra Damskov says she read an op-ed by a sociologist who called any trauma story “the pornography of emotional hurt,” and then Damskov couldn’t write her story for years. It wasn’t until a teacher told her to “write about what you can’t write about” that she was able to unlock it.

It’s second nature for many of us as human beings to measure our suffering against that of other people, and to say, it could be worse. That’s not necessarily bad. It makes us empathetic. It helps us keep perspective.

But as a writer, you should never apologize for writing about trauma, nor should you shirk from your story because you worry it’s not traumatic enough. The point isn’t the nature of adversity, but the meaning you make out of it, and how you tell it.

Take the novelist Edith Wharton. She grew up wealthy, married wealthy, and set her stories among high society New York in the late 19th and early 20th centuries. In The Age of Innocence, just because Newland and Ellen are rich doesn’t make it less wrenching when they fall in love, and are ripped apart. It’s no less poignant when Wharton writes near the end:

It seemed to take an iron band from [Newland’s] heart to know that, after all, someone had guessed and pitied…And that it should have been his wife moved him indescribably.