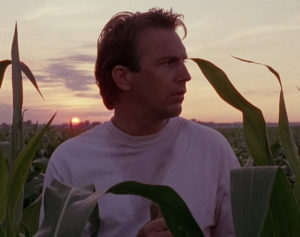 You may have noticed there’s been much talk, not to mention outrage, over the final episodes of Game of Thrones. There’s even a petition going around, requesting that HBO rewrite and reshoot the final season.

Moral: it’s important to give your stories a great ending; it doesn’t matter so much if it’s upbeat or tragic as long as it feels just right for that particular tale.

The best advice about endings comes from Aristotle who said a good ending should be “surprising but inevitable.” In this context, inevitable means the ending shows the blossoming from seeds that have been planted by the events and characters along the way. But the ending won’t be satisfying enough if we could have written it ourselves, so it needs to be surprising, either in what happens or in how we get there.

I’ll give an example, using the 1989 film Field of Dreams. It’s one of those movies you’ll either find ridiculously hokey or so moving you can’t talk right after.

Ray Kinsella is a corn farmer living in Iowa with his wife and kid. One night, he hears a mysterious voice in his cornfield saying, “If you build it, he will come.” And he has a vision of turning part of his cornfield into a baseball diamond. Strangely enough, he heeds the voice because he doesn’t want to be overly pragmatic like his father, now dead, with whom Ray had a troubled relationship.

And the plot gets even crazier. The Chicago White Sox team from the 1919 World Series (which they “threw”) shows up to play, including Shoeless Joe Jackson, about whom Ray and his father once had a huge argument. Then Ray feels he must go find a reclusive author and bring him to the field, then Ray and the author get a vision to bring an old man to the field who once played in the majors for one game. Meanwhile, Ray is going bankrupt for following these insane visions.

At the end…a young man in a baseball uniform emerges from the corn. It’s Ray’s father, well before Ray was born. That’s the he who was destined to come. Ray introduces his father to his family, then plays catch with him, the wounds of the past healing…as people from all over start arriving to see this field of dreams.

We see throughout the movie that Ray is haunted by his unresolved relationship with this dad, but we never suspected the guy would walk out of the corn. When it happens, however, it feels exactly right. There’s a reason grown men cry as they watch.

Some other stories with superlative endings: the film Moonlight, the novel Jane Eyre, and the final episode of Veep.

(For more insight on endings, check out this post by Kelly, our dean of faculty.)