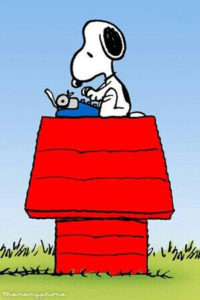 As we enter the lazy days of August, I’m going to (lazily) borrow some advice from two writers.

Ann Patchett recently published an essay in the Washington Post about how Snoopy influenced her as a writer. Not Snoopy’s actual writing, which wasn’t that stellar. (He began almost every story with: It was a dark and stormy night.) But Patchett drew inspiration from the bravado with which Snoopy approached writing, perched atop his doghouse with a typewriter, reminiscent of the bravado he displayed perched atop his doghouse as a World War I flying ace.
Indeed, I can see a Snoopy-like flair in Patchett’s work. Her novel Bel Canto, for example, is about a group of strangers thrown together when taken hostage by terrorists in a Latin American country.

See the sweep in the opening lines, after a famous opera singer has just performed:

When the lights went off the accompanist kissed her. Maybe he had been turning towards her just before it was completely dark, maybe he was lifting his hands. There must have been some movement, a gesture, because every person in the living room would later remember a kiss. They did not see a kiss, that would have been impossible. The darkness that came on them was startling and complete.

Lorrie Moore recently published an essay on Literary Hub that begins with a handwritten fan letter saying her work is getting better and sicker. At first she thought it said better and richer, which seems preferable, but then Moore realized there’s some merit to “sickness” in storytelling. Human nature often takes us there, or, as Moore says, “The route to truth and beauty is a toll road—tricky and unpretty.”

And I can see the “tricky and unpretty” in her work. In her short story “Charades,” for example, the whole thing takes place during a game of charades at a family Christmas, which descends into a kind of chaos.

Notice the skewed humor in the opening lines:

It’s fitting that Christmas should degenerate to this, its barest bones. The family has begun to seem to Therese like a pack of thespians anyway; everyone arrives, performs for one another, catches early flights out, to Logan or O’Hare. Probably it’s appropriate that a party game should literally appear and insert itself in the guise of a holiday tradition (which it isn’t). Usually, no one in Therese’s family expresses much genuine feeling anyway; everyone aims instead—though gamely!—for enactments.

On top of their great advice, it’s interesting that these writers have pinpointed something specific about the specialness of their work. Try to identify something unique and useful about your writing (or yourself) and see how that might flavor your work.