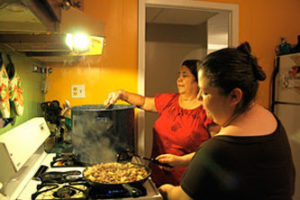 Sometime this holiday season, I’m going to make my grandmother’s broccoli-cheese casserole. It’s gooey, it’s crunchy, and every time I smell it, it heightens how much I miss her.

That’s the thing about this Season of Eating — so much food, and almost all of it is laden with not just calories but memories, hopes, connections. It might be a challenge for our pants, but it’s a feast for our writing.

So why not use the cookies and casseroles and cheesey pouffes to talk about something touchy, something scary, that story you’ve yearned to tell, but don’t yet know how to tell it?

“Writing about food allows you to talk about uncomfortable subjects in a way that’s non-threatening,” Chatman says. “If I say I want to write about how slave masters denied their slaves meat, I’m not going to get the job. But if I write about diet and nutrition and the rate of heart disease among African-Americans, how that’s connected to diet, how the meat we’re eating now isn’t what we were eating historically, that’s a story I’ll get to tell.”

Whenever I think of my grandmother’s broccoli casserole, I smell melting Velveeta in her kitchen. If I think a moment longer, I recall it mixed with the zing of perm ammonia, because after Grandma popped the Corningware into her oven, she would dash down the stairs to her in-home beauty salon to set or rinse or trim someone’s hair.

Once, she owned her own beauty shop, but after a burglar robbed Grandma at knifepoint, my grandfather forced her to shut it down. All those trips up and down those stairs, all because of choices made by two men. Now, that’s a story.

Here’s your holiday assignment, writers:  One, list the most memorable things you ate this season. Note the strongest sensory details, and look beyond the taste, texture and smell of the food itself. Why, exactly, was that the gloppiest Baked Alaska you’ve ever eaten? Drill down.

Two, list the stories you’ve struggled to write about. Find the food angle. It’s there, as an entrée, or just an appetizer. Or even just an ingredient.

If you’re saying, “I want to write about the National Flood Insurance Program — what’s the food angle there, smart aleck?” Don’t be too hasty*. Turn off your phone and stare out the window. Doodle. It’ll come to you.

*PS-By the way, the NFIP covers farms, and recently made flood mitigation recommendations for Yolo County, California, where the top crops are almonds, tomatoes, and wine.