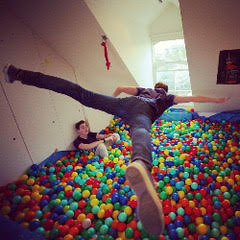 That was Nick Flynn, author of several books including the memoir Another Bullshit Night In Suck City and the forthcoming My Feelings, speaking to a Gotham class recently. The students laughed, some of them a bit ruefully.

There are days when you’re trying to construct a plot and it feels like you’re erecting the Empire State Building with a Sears hammer and a pastry torch. When your characters all feel like strangers who will never warm up to you. When you write a scene inspired by your childhood and then need to lie down for an hour.

Those are the days it’s work. They’re not necessarily bad days because, my god, it’s satisfying when you stand back and realize you built a story that can stand on its own or a scene that is emotional, and moving.

But it’s not all work. Sometimes you start writing and find you’re not pulling every word out with some kind of medieval dental tool. Sometimes you’re typing and laughing at the same time. Sometimes you create a romantic hero so sexy you fall in love with him.

So here, for absolutely no reason whatsoever other than Nick Flynn reminded me, are three suggestions for you to try this month that (hopefully) will be both productive and fun:

If those ideas sound more like work than play, by all means, ignore me.  Do something simpler: Pick up your pen, start writing, and give yourself a day that, like Phil Connors, you’ll want to live over and over and over.