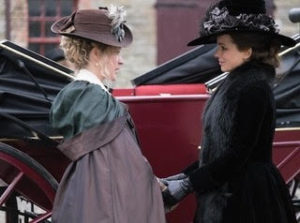 I settled into my balcony seat at my favorite movie theater, the Paris. The last of the theaters that shows only one movie, two previews, and is run impeccably well. With a curved screen awaiting behind the purple velvet curtain.

I was there to see Love and Friendship, a film adaptation of a little-known Jane Austen novel. Even though it was a sunny holiday afternoon, the place was packed.

Few writers have as fierce a fan-base as Jane Austen. As far as I can tell, she’s got Dickens, Tolstoy, and both Brontë sisters beat. Maybe Harry Potter puts up a fight, but let’s check that score in a hundred years or so.

I consider myself more an admirer than a fan (or Janeite, as they’re known), but my wife adores Austen and credits her bold heroines with inspiring her to break tradition—leaving her close-knit family to travel the world as a diplomat.

Yes, all those things, but as I sat there in the Paris (in this age of multiplexes and Twitter and Internet listicles) I thought of something else about Austen. Elegance. Not just the fancy costumes and rarefied settings, but the consummate wit, style, and uniqueness of her stories.

From Sense and Sensibility, here are two sisters (one romantic/one pragmatic) talking with a fine young man:

“Have you been lately in Sussex?” said Elinor.

“I was at Norland about a month ago,” replied Edward.

“And how does dear, dear Norland look?” cried Marianne.

“Dear, dear Norland,” said Elinor, “probably looks much as it always does at this time of the year. The woods and walks thickly covered with dead leaves.”

Real people, real problems, real heart-pounding emotions. But Austen puts it all in a package with her own special elegance.

A touch of elegance is a good thing for us to strive for in our writing, even if we’re telling stories about working class folks with drinking problems, ala Raymond Carver.

Waiting in line to get popcorn, before the film started, I was struck by the woman behind me—an older woman with long blonde hair, thick red lipstick, and a purple paisley jumpsuit. I was reminded of another paragon of elegance—the artist formerly living known as Prince. I found myself imagining Austen and Prince meeting up in heaven.

Thursday, folks! Time to get thoughtful with Gotham President Alex Steele. It's #GWThoughtfulThursday

If you're missing Inside Writing (we are too), you can sign up for Season 3!

The most-clicked links in this week's newsletter were: